Blessed Theophylact: The Church for the Healing of Man

Blessed Theophylact (c. 1050 - c. 1108) commenting on the image of the Orthodox Church in the Parable of the Good Samaritan: 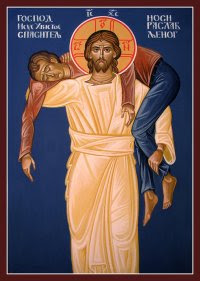 “And at every baptism those who are baptized are delivered from wounds of the soul when they are chrismated with the oil of myrrh and then immediately commune of the divine Blood. The Lord lifted up our wounded nature upon His own beast of burden, namely, upon His own Body. For He made us members of Himself and communicants of His own Body; and when we were lying down, wounded, He raised us up to His own dignity, making us one Body with Himself.

The inn is the Church, which receives all. But the law did not receive all. For the law says, the Ammanite and the Moabite shall not enter into the Church of God. But now, from every tribe and people, God accepts those who fear Him and who desire to believe and become a member of Christ’s body, the Church. God receives all, even sinners and publicans. See the preciseness of His expression, how He says that the Samaritan brought him to an inn, and took care of him.

Before he brought him to the inn, he had only bound his wounds. What then am I saying? That the Church had been established, becoming the inn which receives all, and was increased by the faith of nearly all people, then there were the gifts of the Holy Spirit, and the grace of God was spread far and wide. You may learn this from the Acts of the Apostles. The innkeeper is a type and symbol of every apostle, teacher, and archpastor, to whom the Lord gave two pence, representing the two Testaments, Old and New. Just as both coins bear the image of the one king, so do both Testaments bear the words of the same God. When the Lord ascended into the heavens He left these two coins in the hands of the apostles, and in the hands of the bishops and teachers of every generation.”