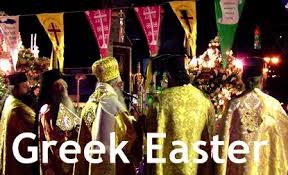 On Easter Saturday, or Holy Saturday, the eternal flame is brought to Greece and passed on to the priests to take the flame back to their churches, where a main candle in the church is lit with this flame. On this day, people will be preparing the lamb for the Easter Sunday celebrational meal, they will cook any foods that can be prepared a day ahead and will also prepare and cook in the early
evening, a greek Easter soup - Mayeritsa.


Just before midnight, everyone, including children will head to their local church. There will be so many people there that they will just gather outside of the church, often with speakers to be able to hear the priest inside. Everyone will bring along with them a thin white candle - or you will find many street sellers around with an array of decorated Greek Easter candles for sale. Just before midnight, all the lights will be put out with just the eternal flame flickering.

After midnight, the priest calls out, Christos Anesti, which means Christ is Risen. He will then take the flame and light the candles of those closest to him with the eternal flame. These people will then pass the flame on to others and so on, until it has reached all the people gathered outside, and everyone's candle is alight. People will greet each other with Christos Anesti and reply with Alithos Anesti - Truly He is risen. The crowds will then return to their homes, protecting their flames so that they don't go out until they reach their homes. It is a wonderful sight, to see the dark night, lit up by thousands of flames moving slowly down the streets, disbursing different ways to their homes.

Once they arrive home, it is a custom to create a cross on the front door of their homes, made with the smoke of the flame. It is believed that their home will then be blessed for that year. As midnight ends the period of lent, the Greeks will go home and traditionally sit down to a bowl of Mayeritsa - a Greek Easter soup that is always eaten on this evening. This soup will have been prepared earlier in the evening and kept warm whilst at the church ready to eat on their return, along with tsoureki bread and the red cooked eggs.


On Easter Sunday, some will be rising very early to prepare the ground and start the wood or coals burning in preparation for the Lamb on the Spit, which is the traditional meal that is eaten on this day.


Another meal prepared and cooked at the same time is Kokoretsi, which is a Greek Easter appetizer, traditionally only cooked at Easter in Greek homes, (available in taverna's most of the year) which is also cooked on a spit, over the hot coals. As people arrive, everyone takes a turn at sitting by the embers of the fire, turning the spit and enjoying the company and comaraderie on this day. People will greet each other saying Kalo Pascha - Happy Easter.


Tsoureki (tsoo-REH-kee) is the traditional bread of Greek Easter. Tsoureki is a rich yeast bread flavored with orange and a delightful spice called Mahlab (also called Mahlepi) that is ground from the pits of wild cherries.

This day is a day of celebration, of the end of lent, of the resurrection of Christ and of life itself. There will be large gatherings at peoples homes, there will be a feast, with plenty of food and wine, song and dance and this will go on until late in the evening, it is such a wonderful day, no one wants it to end.