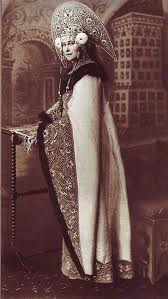 'There will come a time when gifted poets will write verse in praise of the Grand Duchess, her noble soul, her radiant feats, not only ascetic feats but also feats of love and mercy. Her beautiful and noble deeds, her sacrifice, a sacrifice made on the altar of love, will never be erased from the memory of human nobility and mankind will bless her as great, for she was wedded to love'.
Abbot Seraphim, The Martyrs of Christian Duty, P.12, Beijing, 1920.

The future Grand Duchess and New Martyr Elizabeth was born in 1864, the second of seven children. She was the daughter of Ludwig IV, Grand-Duke of Hessen-Darmstadt, and Princess Alice, daughter of Queen Victoria. Since she was half English, Ella, as she was called, often visited Queen Victoria in England, becoming her favourite granddaughter. Here she stayed at Windsor Castle, Osborne House and also at Balmoral in Scotland. There survives an extensive correspondence in English with her beloved grandmother in 'dear England'. Educated in a traditional English way by an English governess, Ella's mother instilled in her a Christian spirit, according to the principle of 'love thy neighbour'. As her earliest biographer, Metropolitan Anastasy, wrote: 'An English imprint undoubtedly lay on all her tastes and habits; the English language was closer to her than her native German'. When Princess Alice tragically died of diptheria in 1878, aged only 35, her last will was that her coffin be draped with the Union Jack.
In 1884, aged nineteen, Elizabeth married the Grand Duke Sergei, the son of Emperor Alexander II of Russia in two ceremonies, one Orthodox, the other Protestant. Deeply in love with her husband, she began to study the Russian people and culture and above all the Orthodox Faith which had moulded them. She long hesitated to join the Orthodox Church, for fear of upsetting her immediate family who were Lutherans. Then after two years of intense study and prayer, of her own free will she finally decided to become an Orthodox Christian by conviction. She was duly received by chrismation into the Orthodox Church on the Saturday before Palm Sunday 1891. In this decision only her grandmother, Queen Victoria, wrote her a letter full of encouragement and support, for which Elizabeth replied thanking her for her goodness and motherly love. Elizabeth described this event in one of her many letters in English, dated 5 January 1891, to the future Emperor Nicholas II. Here she described how she had long 'continued in outward forms to be a Protestant when my soul already belonged to the Orthodox belief'.

Holy New Martyr Elizabeth, pray to God for us! 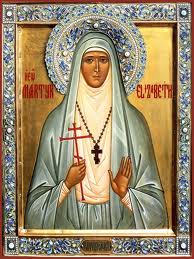 AN APPEAL
Since 1998 we have been approached by a number of young girls both from England and the United States and also two professed nuns who have inquired about the possibility of establishing an English-language Orthodox Convent in Felixstowe.
Such a Convent would be faithful to the Russian Orthodox Tradition and Calendar, but expressed in the English language. It would be dedicated to the Holy New Martyr the Grand Duchess Elizabeth. Such a dedication would be most apt, given the Grand Duchess' Elizabeth's many visits to England and the many records and photographs of her visits here, which are kept in the Royal Archives at Windsor Castle and Elizabeth's cousin's family visit to Felixstowe in July 1891.
Having spoken to Archbishop Mark about these inquiries, we were given the following advice. The Archbishop would not give his blessing to a new Convent without the initial presence of three nuns. Also, he is concerned that as a working priest, I would not be able to give the nuns the regular liturgical life, time and spiritual care which they would require.
I fully obey and agree with Archbishop Mark's advice. Moreover, despite the presence of an Orthodox church, priest and choir in Felixstowe and all the liturgical resources required, I cannot see how humanly any of this is possible, given our complete lack of financial resources. We would need hundreds of thousands of pounds in order to accommodate nuns, pay for the running costs of a Convent and provide daily liturgical services. However, it is also true that the need for an English-language Convent, faithful to the Russian Orthodox Tradition, is becoming more and more acute.
Therefore this is not an appeal for financial resources or donations. There is no episcopal blessing for such an appeal. This is an appeal for something even more precious, the prayers of our readers. Please pray that the need for such a Convent will somehow be met, either here or elsewhere, through the miracle of God's grace and according to His Will.
May you and Orthodox Christians everywhere, and all England, be blessed through the prayers of the Holy New Martyr Grand Duchess Elizabeth.