Israel: Turkey - The greatest threat to the world’s peace 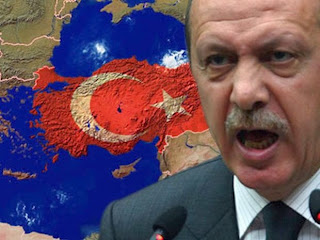 The greatest threat to the world’s peace, at this moment, comes from a man named Recip Tayyip Erdogan. He is the prime minister of Turkey, at the head of the Justice and Development Party (“AK,” from the Turkish).

A former mayor of Istanbul, he was arrested and jailed when he publicly recited Islamist verses (“the mosques are our barracks, the domes our helmets, the minarets are our bayonets,” etc.), in defiance of the old secularist, Ataturk constitution, which made it an offence to incite religious and racial fanaticism.

Erdogan’s credentials as an anti-Semite, but also as an anti-Communist, were established from his school days. He came from an observant Muslim family, and while nothing he says can be taken without salt, he claims an illustrious ancestry, of fighters for Turkish and Ottoman causes.

He is an “interesting case” in other respects. His post-secondary education was in economics; he is a very capable technocrat, and under his direction the Turkish economy was rescued.

He is a dragonslayer of inflation, and public deficits; he took dramatic and effective measures to clean up squalor in the Turkish bureaucracy, and as the saying goes, “he made the trains run on time.”

Erdogan is also a “democrat,” who has no reason not to be, because he enjoys tremendous and abiding domestic popularity. The party he founded came to power by a landslide, and has been twice re-elected. (He had a stand-in for prime minister at first, for he was still banned from public office.)

There are demographic reasons, too, why Turkish secularism has been overwhelmed by Turkish Islamism.

It was he who sent the "peace flotilla" to challenge Israel's right to blockade Gaza (recognized under international law and explicitly by the U.N.).

He made the inevitable violent result of that adventure into an anti-Israeli cause célèbre.

He has now announced that the next peace flotilla will be accompanied by the Turkish navy.This will put Israel in the position of either surrendering its right to defend itself, or firing on Turkish naval vessels.

There is no way to overstate the gravity of this: Erdogan is manoeuvring to create a casus belli.